10 Shocking Facts about School Choice and Education Funding in Indiana

1. Our tax dollars pay for students to attend private schools in Indiana via government vouchers —over $1 billion of sales, use, and income taxes since 2011.  Originally designed to help “rescue” poor kids from failing schools, vouchers increasingly go to students who are white, suburban, and middle class.
Read more...
Yes. Since 2011, about $1.41 billion in tax dollars have been sent to private schools to help subsidize tuition for children. These tax dollars, since 2008, come from sales, use, and income taxes. The bulk of public education is paid for by these tax buckets (not property tax).

Why do our tax dollars pay for students to attend private schools? Back in 2011, legislators created vouchers. The idea was sold in the Indiana Statehouse as a way to save low-income children from “failing” schools (“failing schools” is a label created by the state…marketing is slick). But that group of low-income kids was just a gateway. A toehold.

Since 2011, eligibility tracks to obtain vouchers for private school grew and expanded to eight tracks:
And then in 2021 the state eliminated the partial voucher for higher income earners (only full vouchers are now available) and expanded the income limits, which lead to one of the largest jumps in voucher use. The state spend on vouchers increased 41% in one year from 2020-21 to 2021-22. 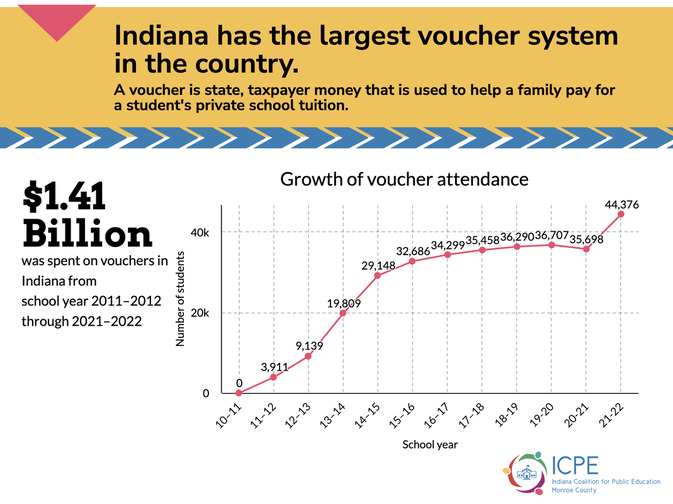 And it’s true. The population that uses vouchers has become more White, more suburban, and more middle class. Below is a sample of some numbers from the IDOE Choice Scholarship annual reports. 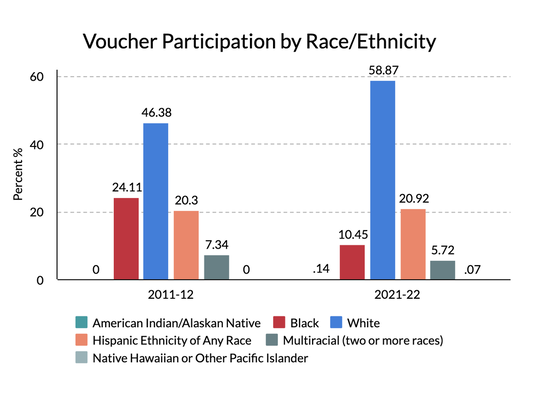 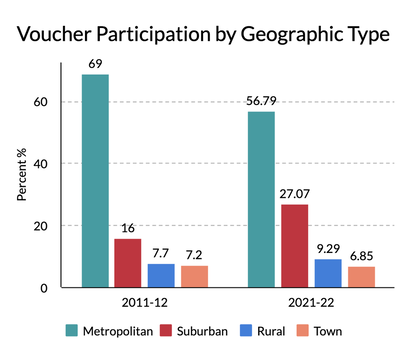 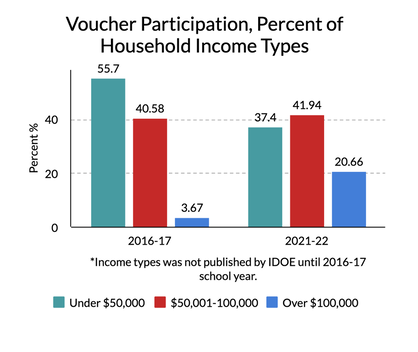 Source: IDOE voucher annual reports, accessed June 2022.
Read more on Indiana's vouchers in this series published in the Washington Post.
Data from voucher annual reports combined into a spreadsheet can be accessed here. It is a work in progress.
2. Hoosiers never voted for school choice—vouchers, charters, educational scholarship accounts, tax credit scholarships. But organizations backed by billionaires helped legislators pave the way for school choice in Indiana with the goal of pushing more and more public dollars to private institutions.
Read More...
​It’s true. The public was never asked to vote on sending dollars earmarked for traditional public schools to charters, private schools, private educational services. It all was decided at the Statehouse.

Charter school legislation was enacted in 2001 in Indiana and later expanded.. That bill was introduced by Theresa Lubbers (R). The program has been adjusted through the years via additional legislation.

Tax credit scholarship (SGO Scholarships) legislation was first enacted in 2009. SB 528 was authored by Carlin Yoder (R). It was then rolled into the budget, HEA 1001. The program has been regularly expanded via additional legislation. This involves tax credits to donations to private school scholarship granting organizations. Advocates have asked for public schools via foundations to also qualify. As of 2022, they have not.

Education scholarship accounts (ESAs) began in 2022-2023 school year.  It was introduced in a separate bill (HB 1005) authored by Bob Behning, but was later rolled into the budget, HEA 1001. School boards throughout the state voiced their opposition to the proposed privatization program.
3. State dollars for private schools and charters come out of the same budget that pays for public schools. No additional funds were added to help pay for more schools. Instead, in Indiana, the  “money follows the child.”
Read More...
Yes. Paying for all these additional charter schools and voucher scholarships for private schools comes from the same tuition support budget. There was no new money added for these school models as funding these programs was built upon the idea that they would save the state money (code for transfer the spending to the pockets of the caregivers ... and, sadly, debt collectors).

Growth in Indiana’s budget for public school personnel has not kept up with growth in its general fund or even inflation. As of October of 2021, the current budget for public school personnel was estimated to be $295 million behind the 2009-10 budget when inflation is taken into account. The 2021-2022 biennial budget, when passed, had significantly made up the difference; however, recent spikes in inflation have eaten into those gains.

The total education budget, which includes higher education, is estimated to be short $1.5 million. Put another way: from 2010 to 2019, state spending on education shrank from 3.24 percent of our Gross Domestic Product to 2.76 percent. Education spending is the MOST significant factor that influences quality of life.

The "money follows the child"/"backpack funding"/"student-based budgeting" funding model was created under Mitch Daniels. It is one of the many pieces used to help privatize public education.
4. Even though we are sending tax dollars to charters and private schools, when adjusted for inflation, the state government has allocated less and less funding towards K-12 education over the past decade--$295 million less in 2021-2022 compared to 2009–2010.
Read MOre...
There were big changes in how K-12 was funded back in 2009 with the basic belief that a market principle of competition would improve education outcomes and drive down costs (remember, we're talking about children, not coffeemakers for sale on Amazon). Under the guise of property tax reform, the state government took control of school funding by legislating that only the state would pay towards the general fund, while giving localities the responsibility for paying for debt service, capital projects, transportation, and bus replacement. Since 2009 only sales tax, income tax, and use tax fund the general public education fund/tuition support fund, putting it at the whim of the market (property tax is steady, consumer spend and jobs numbers fluctuate, hence why Indiana needs a strong rainy day fund). In addition, property taxes were capped so that they could not exceed 1 percent of a home’s assessed value. The poorer the town, the less money the district could raise. On top of that, the government created private school vouchers, resulting in the funding of a separate education system under the same budget. That program has expanded to more and more of the public year after year. And there are also charter schools that are authorized by outside district entities, often, non-local. Yet another education system being funded under the same budget. 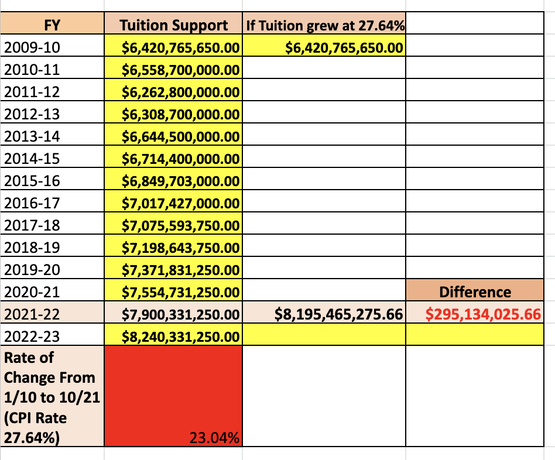 Source: https://drphildowns.com/node/48
5. Does your school district have an operational referendum, large class sizes, limited course selections, and/or has it closed one or more of its schools in the past decade? It’s most likely due to an overall funding shortage from the state in addition to public dollars going to charter and private schools.
Read MOre...
See fact 4 for a summary. But also add to it a $300 million cut by the statehouse in 2009 under Mitch "The Knife" Daniels in the wake of the Great Recession. Just months later, $300 million was found. It was never returned to the education budget. In response to the $300 million cut, districts across the state had to make difficult cuts. In MCCSC, for example, $5.7 million was the loss. To avoid a fiscal cliff, the district eliminated programs and fired a number of teachers. Class sizes ballooned.  Since 2009, more than 40 percent of the school districts in Indiana have put a referendum on the ballot. And Indiana's Legislative Services Agency has found in a 2019 study that schools with operational referendum are able to pay their teachers more.
​
6. Almost all private schools receiving vouchers in Indiana are religious. Unlike public schools, private schools are not required to make their budgets, curriculum, hiring practices, or teacher qualifications public. State funds to private schools mean a loss of accountability to the public for how education funding is spent.
7. Inadequate oversight of charters opens the door to for-profit schemes and fraud. Recently, two Indiana virtual charter schools defrauded the state of over $86 million. No one has been charged and the $86 million has never been paid back to the state educational fund.
8. Our tax dollars are being used to perpetuate segregation when they fund private and charter schools. These schools can’t and some won’t serve all. Private schools can discriminate based on religion, disability, and sexual identity. Charter schools serve a limited number of self-selected families. However, public schools must serve all.
9. Teachers in charter and private schools do not have to comply with the same Indiana education licensure standards to teach as public school teachers.
10. In the 2021 legislative session, the state created educational scholarship accounts (ESAs) and also increased the income level for vouchers (for example, a family of 4 earning as much as $147,000 can qualify for a voucher) affirming that vouchers are government subsidies for private religious  schools.​​​​​

School choice has been marketed as a method to increase access to educational options. This argument begins to break down, however, when you ask the questions, Access for whom? And to what? Are we further fragmenting our communities? Is it possible to afford more schools on less funding?

10 Reasons Why Public Schools Are the Best Choice

You can access the data pulled from all the reports and various lists from IDOE at the follow spreadsheets. All data is updated by volunteers. If you are interested in helping, let us know: contact at keepeducationpublic dot org.

The vision of the Indiana Coalition for Public Education–Monroe County is for all children to have high-quality, equitable, well-funded schools that are subject to democratic oversight by their communities.

Our mission is to be the primary voice for public education advocacy in Monroe County.