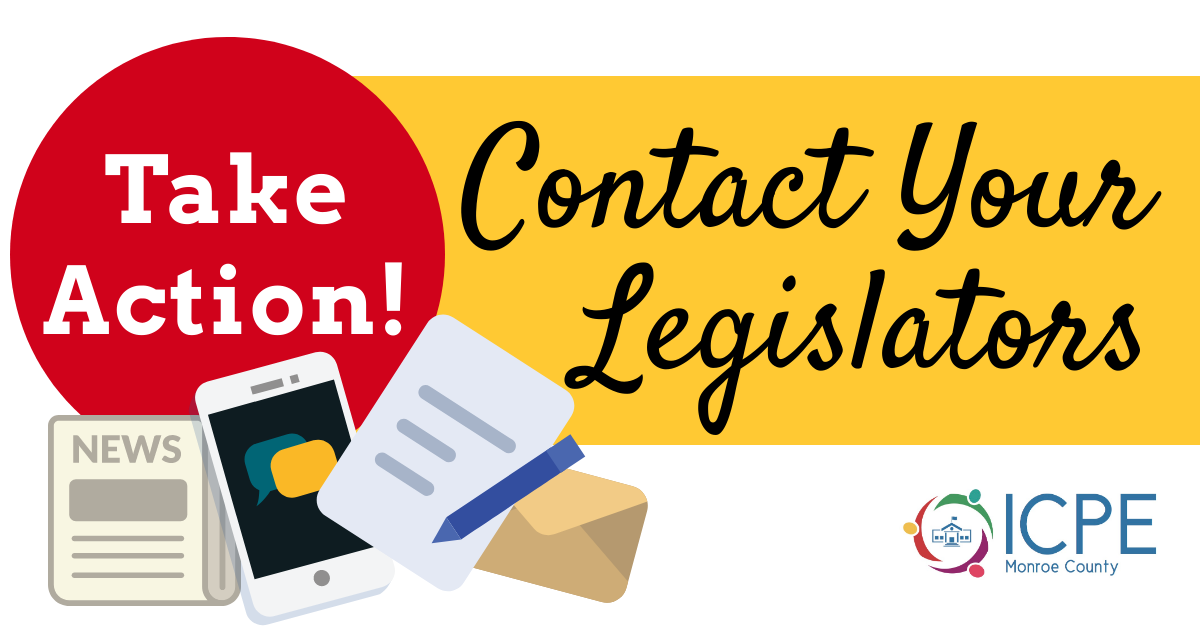 Tell Your Legislators NO! to ESAs and Voucher Expansion

Tell Indiana Lawmakers to Vote NO
​to Voucher Expansion and ESAs in House Bills 1001 and 1005 and Senate Bill 413
The tail is wagging the dog again at the statehouse. Billionaires are trying to usher bills—here and in other states—that will provide more funding to those that would never attend public school in the first place while public schools, who serve about 90% of students, try to navigate through this pandemic on tight, tight budgets. Indiana has NO constitutional duty to provide funding to private schools. There is no new revenue to provide private education to a few.

2/20/21 - Quick update on progress of legislative session: SB 412 is dead. HB 1005's language has been added to the state budget (HB1001). It is now estimated that "More than one-third of the proposed state funding hike for Indiana schools could go toward the state’s private school voucher program under a Republican-backed plan that could boost the program’s cost by nearly 50% over the next two years." ​Read more here.

Indiana lawmakers are considering giving selected parents who withdraw their children from public school an education savings account (ESA) and a taxpayer-funded debit card loaded with an estimated $5,000 to $7,000 per child to spend at their discretion on private school tuition, home school, tutoring, therapy, and other educational services.

Lawmakers have also proposed spending more money on the school voucher program so upper class families can send their children to private school at taxpayer expense. Eligibility would expand to 300% of the threshold to qualify for reduced-price lunch,  which would cover a family of four earning $145,000 annually, about double that of the state’s median family income, and a family of five with annual income of $170,000.

The charter school portion of SB 413 has been moved to a summer study committee. However, SB 413 still contains voucher language. And that language should be opposed.
SB413 contains language in regards to sharing local property tax dollars with charter schools, which includes referendum funding (if your school district has a tax referendum). As it stands, charter schools do not receive local property tax dollars. One of the key selling points when charter schools were created in Indiana was that they would not receive property tax money, and that local property tax funds would be reserved for the local public school that has the responsibility for serving all children and has a school board elected by the local community. This would change that. Remember that a local community has no control over whether or not a charter school locates in its boundaries, or over who owns or operates it. A state charter school board or a board created by any of the 30+ public or private colleges in Indiana or a board primarily appointed by Indianapolis' Mayor, completely control that decision. Most local residents typically don't even know it's being considered, until after the decision is made.

House Bill 1005 as introduced would cost an estimated $202M over two years, consuming most of the $227M increase in education funding proposed by the Governor. Public schools would be left with a paltry $25M in new funding, despite serving approximately 90% of students in the state. Similar legislation pending in the Senate has a two-year price tag of $150M. Even if bill amendments make the estimated costs less, it still creates an opportunity for that amount to grow in future legislative sessions if educational savings accounts are approved.

Why We Are Against These Bills

​I am writing to you today to ask you to oppose HB 1005 (School Choice Matters) and ESA and voucher expansion language in HB 1001. This legislation would divert millions of dollars from Indiana's traditional public schools when they are most in need of stable support.

Our public schools have continued to go above and beyond, dealing with the demands of our current pandemic, while educating 90% of Indiana's children. They are facing increasing challenges as they deal with lost learning and attempt to provide additional services to students, all while Indiana's teachers continue to be under-valued compared to our neighboring states.

It is wrong in this economic climate to prioritize giving extra tax money to high income parents who are already able to pay private school tuition. Additionally, ESAs would divert public funds to home schools and independent unaccredited schools, yet provide no accountability.

Indiana Coalition for Public Education Testimony on HB 1005
House Education Committee
February 3, 2021
​
Good afternoon, I am Joel Hand representing the Indiana Coalition for Public Education. Today, we rise in opposition of HB 1005.
When considering HB 1005, all I could think of were the words of Ronald Reagan who once said, “There you go again.” There you go again failing to be fiscally conservative. With a price tag of $202M, HB 1005 is NOT fiscally conservative. Since 2011 when the voucher program was created, we have already spent in excess of $1 Billion taxpayer funds on private school vouchers. This year alone we will spend $172M on vouchers. In a time when our state leaders have cautioned public schools to brace for a flat-lined budget and even more belt-tightening due to an economy slowed by the worldwide pandemic, it seems wildly reckless to increase government handouts and create a whole new government bureaucracy at the cost of $5M to oversee and administer an Education Scholarships Account program.

There you go again robbing public school students to benefit a wealthy few. Our current school voucher program already takes away $172 per student from every public school. For a school district of 6000 students, that equates to more than $1M lost per year. HB 1005 would allow a family of five earning up to $170,000 a 90% voucher. It shifts the burden of paying for private education for the wealthy already going to those schools onto the backs of all Hoosier taxpayers. [According to the Pew Research Center, a family of 5 earning $170K/year qualifies as “upper class” in many cities throughout Indiana such as Fort Wayne, Muncie, Lafayette, Elkhart/Goshen, or Michigan City. Yet, under HB 1005, that same family would be entitled to receive a voucher to pay the private school tuition that the family has likely already been able to pay for themselves.] At current levels, more than 60% of voucher students have never attended a public school. That percentage will only increase. HB 1005, does not increase “choice” for any additional poor or disadvantaged students. But it does create a government handout, a social welfare or entitlement program if you will, for the wealthy.

There you go again expanding a private school voucher system at the expense of public schools. This bill does not create a new line-item in the State Budget and there is no new revenue stream to support it. Instead, the $202M cost ultimately will be sliced out of the same potion of the State Budget that supports the 90% of Indiana students who attend K-12 public community schools. In turn, those schools will be left even further strapped for resources at a time when all schools had large, unexpected costs associated with COVID-19. Where will they turn in the face of even greater lost funding?

In his State of the State Address, while Governor Holcomb expressed his support for school options, he also made clear that “at the same time, those options shouldn’t come at the expense of the public school system, which educates 90% of Hoosier children.” Taking Governor Holcomb at his word, this bill must fail. This bill would consume most of the K-12 funding increase proposed in the Governor’s budget – a budget which would at best, barely keep up with inflation if all $377M went to public schools.

There you go again, finding ways to give more money to schools that are permitted to discriminate. Voucher schools already discriminate on the basis of religion, against special needs students, on the basis of gender identity or sexual orientation as well as students who are low academic achievers or have discipline issues. Giving unregulated taxpayer dollars directly to parents who are free to use those funds to teach racial, gender, religious, economic and all other forms of discrimination, hate and bigotry or, for that matter, to teach the overthrow of our government and to support terrorism is wrong. There are no requirements that ESA money given to parents will be used to teach Civics.

There you go again, increasing government spending without oversight, transparency or accountability. Nothing in HB 1005 would preclude a parent from taking their ESA funds and spending it to purchase say, a basketball goal, a flat screen television, a zoo membership, or even model trains. In other states where ESAs exist, parents have used the money to take the family to Disneyland! The opportunity for fraud and abuse is staggering. When public schools expend funds, they must do so transparently and only after approval by a publicly elected board. ESAs and voucher schools have no transparency, no public oversight and no financial accountability.

There you go again, throwing more money at a failed experiment. Vouchers were initially sold as a means improve student achievement. Yet, studies have shown that students leaving public schools to attend voucher schools experience declines in standardized tests scores. Parents accepting an ESA are not required to have their students participate in I-LEARN or other standardized testing to ensure that they are learning and making progress. They need not prove compliance with teaching Indiana academic standards. Where is the rigor? Where is the academic accountability?

The message of this bill is a slap in the face of Hoosier taxpayers and the more than 90% of students in public and charter schools, their beleaguered and underpaid teachers and overburdened administrators.