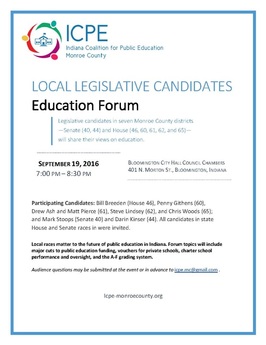 
Bloomington, Indiana—Legislative candidates for five contested Indiana House seats and two Senate seats will share their views on education at a forum on Monday, September 19, from 7:00 to 8:30 p.m., in the Bloomington City Hall Council Chambers at 401 N. Morton St.

Local races matter to the future of public education in Indiana because state legislators are responsible for the oversight and funding of our public school system. Through the fiscal years 2009 through 2015, state-directed funding of public schools in Indiana fell by a total of more than $3 billion, and has not yet returned to 2009 levels, according to data furnished by the Legislative Services Agency. Public education dollars have been sent to charter schools and to private schools through vouchers. Laws have also emphasized high-stakes testing and grading of schools while lowering standards for teachers and administrators.

Candidates who will participate in Monday’s forum include Bill Breeden (House 46), Penny Githens (60), Drew Ash and Matt Pierce (61), Steve Lindsey (62), and Chris Woods (65); and Mark Stoops (Senate 40) and Darin Kinser (44). As of this writing, we have received no response from incumbents Bob Heaton or Jeff Ellington, nor from candidates Chris May or Eric Koch. Linda Henderson and Peggy Mayfield will be able to attend.

After introducing themselves and identifying the education issues that they see as pressing, candidates will answer questions from the audience in a moderated format. Questions for candidates may also be submitted in advance to icpe.mc@gmail.com.

This event is sponsored by the Indiana Coalition for Public Education--Monroe County (http://icpe-monroecounty.org/).